If final award is ambiguous, arbitrators may clarify it.

The functus officio doctrine provides that, absent agreement of the parties, once the arbitrators have issued a final award, they no longer have the authority to modify it. But what if a panel’s award is ambiguous, and the parties require further guidance? The Second Circuit has now joined the Third, Fifth, Sixth, Seventh, and Ninth Circuits in recognizing an exception to functus officio where the arbitrators are asked to clarify an ambiguity in the award.

The underlying dispute concerned a life reinsurance treaty that permitted the reinsurer to raise premiums based on a change in anticipated mortality. In the event of a premium increase, the treaty allowed the cedent to recapture the business and cancel the reinsurance.

The cedent challenged the premium increase in an arbitration, arguing that the increase was not based on a change in mortality. The panel issued a “Final Award” upholding the increase. Importantly, the award also stated that, if the cedent opted to recapture, the recapture would be retroactive as of the date of the premium increase. In that case, the award required that premium and claim transactions after that date would be “unwound.”

The cedent asked the arbitration panel to resolve this dispute over its award. The reinsurer objected, arguing that the panel had no authority to modify the award. Rejecting this objection, that panel issued a clarification stating that the reinsurer was entitled to keep the unearned premium, but would also be required to pay the associated claims.

The reinsurer petitioned for confirmation of the original award, arguing that functus officio barred the panel from issuing the clarification. Ruling for the cedent, the Second Circuit upheld confirmation of the clarified award. The court joined five other circuits in recognizing an “ambiguity” exception to functus officio. The exception applies where: (1) the initial award is ambiguous; (2) the subsequent award does not substantively modify the initial award; and (3) the subsequent award comports with the parties’ intent as set forth in the governing agreement. The Second Circuit concluded that all three conditions had been met.

The assault and battery exclusion does not bar coverage where diocese did not actually commit or direct assault.

The Hartford Archdiocese sought coverage after its excess insurer refused to indemnify it for sexual abuse claims involving the diocese’s priests. After a bench trial, the district court found that the diocese was entitled to coverage.

On appeal, the insurer argued first that the claims were barred by the policy’s assault and battery exclusion. Under the exclusion, the coverage did not apply “to any Assured for assault and battery committed by or at the direction of such Assured.” Rejecting the insurer’s argument, the Second Circuit held that the exclusion barred coverage only for an Assured that actually committed or directed the assault. Thus, even if the priests could be considered “assureds,” the exclusion did not bar coverage for the Archdiocese.

Next, the insurer argued that, with respect to one of the claims, there had not been an “occurrence” under the policy. The policy defined an occurrence as “[a]n accident or a happening or event … which unexpectedly and unintentionally results in personal injury….” The insurer contended that, because the Archdiocese was aware of one priest’s proclivities, it could not meet this condition to coverage.

The Court disagreed. Notably, the court ruled that whether an injury is expected or intended must be determined under a subjective standard. Advocating an objective standard, the insurer had argued there was no occurrence because the diocese should have known that the priest was likely to commit further assaults. But the Court found that the diocese’s reliance on a physician’s contrary opinion was dispositive. Based on the doctor’s opinion, the diocese did not subjectively expect the priest to commit more abuse. Accordingly, the Court concluded that there was an occurrence, and therefore coverage.

Arbitrators’ subpoenas are enforceable if they seek evidence and testimony rather than mere pre-hearing discovery. 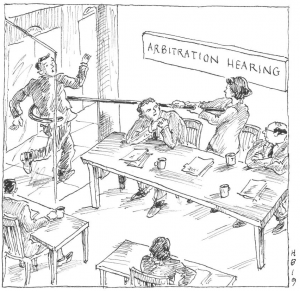 Applying these factors, the court enforced the subpoenas because: (1) the respondents were ordered to appear at a hearing before the arbitrators; (2) the arbitrators were prepared to rule on any evidentiary issues; and (3) a court reporter was ready to record the proceedings for the arbitration record.

The court also rejected the respondents’ argument that the court could not compel compliance because two of the arbitrators had business addresses outside New York and the panel was therefore not “sitting” in the district. The Court concluded that, for purposes of FAA § 7, the location of the hearing rather than the arbitrators’ addresses determined where the panel was “sitting.”