Implicitly rejecting the Bellefonte rule, the Court rules that Excess v. Factory Mutual did not create a special rule capping reinsurers’ obligations for defense costs in addition to limits. 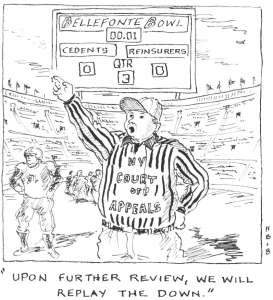 In its controversial 1990 decision in Bellefonte Reinsurance Company v. Aetna Casualty & Surety Company, the Second Circuit held that the amount stated in the “Reinsurance Accepted” provision of a facultative certificate was an absolute cap on the amount recoverable from the reinsurer.  From the beginning, Bellefonte has been criticized as improperly capping reinsurance coverage, even where the underlying policy covers defense costs in addition to limits.

In 2004, the New York Court of Appeals followed Bellefonte in Excess Insurance Company v. Factory Mutual Insurance Company.  Although Excess involved declaratory judgment expenses under a property policy, the Court of Appeals followed Bellefonte in holding that the reinsurer’s obligations for both indemnity and expenses were capped by the facultative certificates.

In Global Reinsurance Corporation v. Century Indemnity Company the issue arose again.  The Southern District of New York held that facultative certificates providing “reinsurance accepted” of “$250,000 part of $500,000” unambiguously capped the reinsurer’s liability at $250,000 for both indemnity and defense costs.  On appeal, the Second Circuit questioned whether Bellefonte was correctly decided.  However, because the reinsurance contracts at issue are governed by New York law, the court perceived the Excess decision as a potential barrier to revisiting Bellefonte.

The Second Circuit therefore certified to the New York Court of Appeals the question whether Excess “imposes either a rule of construction, or a strong presumption that a per occurrence liability cap in a reinsurance contract limits the total reinsurance available under the contract to the amount of the cap regardless of whether the underlying policy is understood to cover expenses such as, for instance, defense costs.”

In a narrow decision, the Court of Appeals answered the certified question in the negative. Rejecting the idea that Excess created a presumption or other special rule of construction for reinsurance contracts, the Court held that “[r]einsurance contracts are governed by the same principles that govern contracts generally.”  Accordingly, courts applying New York law are not permitted “to disregard the precise terminology that the parties used” and “simply assume . . . that any clause bearing the generic marker of a ‘limitation on liability’ or ‘reinsurance accepted’ clause was intended to be cost-inclusive.”

The case now returns to the Second Circuit.

Full disclosure: Chaffetz Lindsey LLP filed amicus briefs on behalf of several reinsurance brokers in the Second Court and The Court of Appeals.

In In re MF Global Holdings Ltd., the Bankruptcy Court for the Southern District of New York held that New York’s pre-answer security statute, N.Y. Ins. Law § 1213(c), required an unlicensed Bermuda insurer to post a $15 million bond before moving to compel arbitration.

Section 1213(c), which is similar to pre-answer security statutes in many states, applies to litigation against unlicensed foreign insurers. Specifically, the statute provides that where an insurance policy is “delivered” in New York by a foreign insurer not licensed in New York, the insurer may not file “any pleading in any proceeding against it” until it either posts a bond “sufficient to secure payment of any final judgment” or “procure[s] a license to do an insurance business in” New York.

The first issue in MF Global was whether the statute applied even though the policy was issued by a Bermuda insurer through a Bermuda broker.  Ruling that the statute did apply, the court reasoned that the policy was “delivered” in New York because the policyholder was headquartered in New York and the policy listed the policyholder’s New York address.  As a result, the insurer “fully expected that the policies would be delivered to New York – a natural destination given [the insured’s] New York address on the policy.”  Accordingly, “[t]he use of a broker or some intermediary for the delivery of a policy…is not enough to skirt the bond requirement.”

The court also rejected the insurer’s argument that a motion to compel arbitration was not a “pleading” under Section 1213(c). Rather, the court followed New York cases construing the term broadly.

Finally, the court held that the Convention on the Recognition and Enforcement of Foreign Arbitral Awards did not preempt Section 1213(c). Rather than conflicting with the Convention, the bond requirement complements it “by ensuring that should a matter be sent to arbitration, particularly in a foreign country…, sufficient funds to satisfy a judgment will be available to a plaintiff in New York.”

Following the court’s decision, the insurer posted the requisite bond and moved to compel arbitration. The court granted the motion to compel, finding that the question of coverage under the insurance policy was not a “core” bankruptcy proceeding.  Accordingly, the parties were ordered to arbitrate their coverage dispute in Bermuda.

“Prior insurance” and “continuing loss” provisions required all sums allocation. 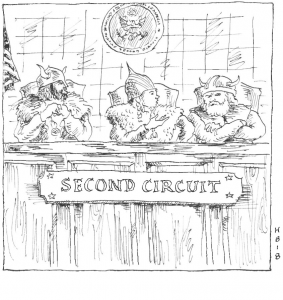 In Viking Pump, the New York Court of Appeals held that there was no per se rule under New York law requiring long tail losses to be allocated on a “pro rata” basis.  Rather, the Court concluded that specific terms of the policies at issue – notably, the non-cumulation clause – required “all sums” allocation.

In Olin Corporation v. OneBeacon America Insurance Company, the Second Circuit applied Viking Pump to a long-running environmental coverage dispute.  The dispute involves coverage under excess policies issued in 1970 and 1972 for contamination that began prior to commencement of the 1970 policy and extended beyond the expiration of the 1972 policy.

The Second Circuit found that two policy provisions required an “all sums” allocation. First, the policies each contained a “prior insurance” clause providing that coverage under the policy would be reduced by “amounts due” under earlier policies covering the same occurrence.  Second, each policy contained a “continuing loss” clause providing coverage for all losses resulting from an occurrence taking place during the policy period, including those losses incurred after the policy expiration date.  These provisions, taken together, indicated that each policy was intended to respond to “all sums” arising from property damage occurring at least in part during the policy period.

However, the case was not resolved by the conclusion that the “all sums” allocation was appropriate. Rather, because the insured had already settled with insurers who had issued policies for prior periods, the court remanded the case to the district court to determine whether the insured had already been indemnified for losses arising from the properties at issue.  If so, the “prior insurance” provision required a reduction in the amounts due under the OneBeacon policies.  The court explained that “after Viking Pump it is clear that the critical factor is whether the loss covered by a policy dictating all sums is also covered by another policy in the same coverage layer, which itself has already provided indemnification to the insured for the loss.”

Parties’ agreement to use non-neutral party-arbitrators did not preclude application of “evident partiality” ground for vacatur.

In Certain Underwriters Members at Lloyd’s of London v. Insurance Company of the Americas, the Southern District of New York granted the reinsurers’ motion to vacate an arbitration award.  The court found vacatur was warranted because of “evident partiality” on the part of the cedent’s party-appointed arbitrator.