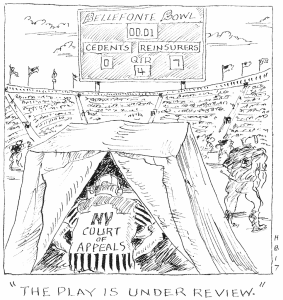 Now, though, the Second Circuit has questioned whether Bellefonte is correct.  In Global Reinsurance Corporation v. Century Indemnity Company, the District Court followed Bellefonte and Unigard in holding that, by providing coverage of “$250,000 part of $500,000,” the facultative certificates at issue unambiguously capped the reinsurer’s liability at $250,000 for both indemnity and defense costs.  On appeal, the Second Circuit questioned the reasoning underlying Bellefonte.

The Court noted that “although [in Bellefonte] we described the amount stated in the ‘Reinsurance Accepted’ provision as an ‘explicit limitation on liability,’ we never explained why this was so.”  Further, the Court stated that “it is not entirely clear what exactly the ‘Reinsurance Accepted’ provision in Bellefonte meant.”  The Court suggested, without deciding, that industry practice and custom might inform this question, but noted that such evidence was not considered in Bellefonte.  The Court also questioned whether Excess was controlling, noting that the “Excess court never addressed, much less decided, the antecedent question of whether the stated limit represented an absolute coverage limit for losses and expenses combined, which is the question that is presented in this case.”

Because the case is governed by New York law, the Second Circuit certified to the New York Court of Appeals the question whether the Excess decision, “imposes either a rule of construction, or a strong presumption that a per occurrence liability cap in a reinsurance contract limits the total reinsurance available under the contract to the amount of the cap regardless of whether the underlying policy is understood to cover expenses such as, for instance, defense costs.”

Court finds vacatur of arbitral award unwarranted in the absence of familial, business or employment relationship between umpire and party.

In National Indemnity Company. v. IRB Brasil Reseguros, the Second Circuit affirmed the district court’s judgment confirming three arbitral awards in favor of retrocessionaire National Indemnity Company (NICO) against its retrocedent, IRB Brasil Reseguros (IRB).  IRB argued that the awards should be vacated because the umpire had been party-appointed arbitrator for Equitas Ltd. (Equitas) in one arbitration, and had accepted a second appointment from Equitas during the arbitration at issue.  Equitas, which assumed older Lloyd’s business, ceded 100% of that liability – along with control over claims handling – to NICO.  IRB contended that Equitas and NICO were therefore  “affiliates,” and that the umpire’s appointments for Equitas created a conflict.

The Second Circuit found that IRB had failed to meet the standard for “evident partiality” – that “a reasonable person, considering all the circumstances, would have to conclude that an arbitrator was partial to one side.” The Court noted that “IRB does not allege that [the umpire] had any familial, business or employment relationship with NICO or Equitas, or that he had any financial interest in the outcome of his arbitrations.”  Rather, the court found that the umpire’s relationships with NICO and Equitas were “professional.”  Indeed, the umpire had actually voted against Equitas as party-appointed arbitrator, and had also accepted appointments adverse to other NICO-reinsured parties.  Thus, said the court, “a reasonable person would not have to conclude that [the umpire] was partial to NICO.”

Court confirms that coverage may be barred by a policyholder’s failure to provide timely and adequate notice, as required under the policies.

In Travelers Indemnity Company v. Northrop Grumman Corporation, the insured, Northrop Grumman, sought coverage under several CGL and environmental policies for multiple environmental claims arising at a site on Long Island.  During the 1970s and 1980s the insured received notice from various government agencies about its potential liability for the contamination of the site.  In the early 2000s, the insured faced several suits involving claims related to soil and groundwater pollution at the site.

The insurers defended principally on the ground that Northrop had not complied with its notice obligations. The district court agreed, and the Second Circuit affirmed.  The court found that the insured did not provide adequate notice of the agency communications because (1) the insured’s broker had sent notice to one insurer at the wrong address and there was no evidence that the insurer ever received it; and (2) the notice to another insurer did not identify the specific policy under which notice was being provided.  The Second Circuit also affirmed the lower court’s holding that notices made between 47 days to nine years after the insured became aware of a potential claim were untimely as a matter of law.

Insurer does not, as matter of law, waive a late-notice defense by failing to identify it in its disclaimer letters …

In Estee Lauder Inc. v. OneBeacon Insurance Group, LLC, the New York Court of Appeals held that where the insurers had identified their late-notice defense in early communications with the insured, the insurers had not, as a matter of law, waived the defense by failing to specifically identify it in later disclaimer letters.  The Court reaffirmed its prior decision in KeySpan Gas E. Corp. v. Munich Reinsurance Am., Inc., that in property coverage disputes, whether an insurer has waived a defense is governed by the common law waiver standard, rather than the “heightened standard” under Insurance Law § 3420(d)(2).  Section 3420(d)(2) requires that liability insurers “disclaim liability or deny coverage for death or bodily injury . . . as soon as is reasonably possible.”  In contrast, the common law waiver standard asks only whether the insurer “clearly manifested an intent to abandon [its] late-notice defense.”

Here, the Appellate Division found that the insurer waived its late-notice defense by excluding it from its disclaimer letters. Reversing, the Court of Appeals emphasized that the common law waiver standard requires “an examination of all factors.”  Because the insurers had raised the late-notice defense in communications prior to the disclaimer letter, the Court held it could not find that the insurers had “clearly manifested an intent to abandon their” defense as a matter of law. Id.