New York’s champerty statute (Judiciary Law § 489(1)) restricts individuals and corporations from purchasing or taking an assignment of notes or other securities “with the intent and for the purpose of bringing an action or proceeding thereon.”  Courts have construed this prohibition narrowly so that it applies only where the acquirer’s primary purpose is to bring suit on the security.  Moreover, § 489(2) establishes a “safe harbor” exempting otherwise champertous transactions in notes or securities “having an aggregate purchase price of at least five hundred thousand dollars” from the prohibition.

The Court of Appeals held that a German bank’s assignment to “a Cayman Islands shell company with little or no assets” of notes originally worth some €180 million, but which had “lost much (if not all) of their value,” was champertous as a matter of law.  The transaction was designed to enable the assignee to bring a lawsuit against another German bank that the assignor for political reasons was reluctant to pursue in its own right.  The assignee agreed to pay the assignor a base purchase price of $1 million, plus a percentage of any proceeds recovered.  Within days of the assignment, and shortly before the statute of limitations expired, the assignee brought suit on the notes in New York state court.

On these facts, the court held that the defendant was entitled to summary judgment dismissing the assignee’s complaint against it.  The court found there was “no evidence” that the assignee’s acquisition of the notes “was for any purpose other than” commencement of the lawsuit.  Additionally, the assignment amounted to a “sham transaction” because the assignee was not bound to pay the $1 million base purchase price “unless the lawsuit was successful.”  Consequently, the assignee was “not entitled to the protection of the safe harbor.”  The court “emphasize[d]” that it had “no problem with parties structuring their agreements to meet the safe harbor’s requirements”—as long as they satisfy the $500,000 minimum threshold under § 489(2) through “actual payment” or a “transfer of financial value” in that amount.

Two of the seven judges dissented.  They would not have found the assignment champertous as a matter of law.  Instead, they emphasized that whether a transaction is champertous turns on “the intent and purpose of the purchaser or assignee,” which “is usually a factual question that cannot be decided on summary judgment.”  They also expressed concern that “the majority’s decision discourages transactions aimed at fostering accountability in commercial dealings.” 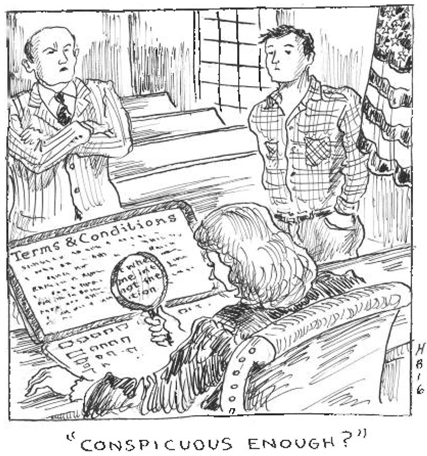 In this putative class action arising from Amazon’s online sale of a dietary supplement, the Second Circuit found that “reasonable minds could disagree” on whether Amazon’s website provided the named plaintiff with reasonable notice of Amazon’s terms and conditions requiring arbitration of his claims.  As a result, Amazon was not entitled to dismissal as a matter of law.

The court explained that a party’s “assent to an online contract is not meaningfully different” from a “paper contract.”  Both are governed by ordinary “principles of contract formation” under state law (in this case, Washington law).   For online transactions, adequacy of notice “depends heavily on whether the design and content” of the particular webpage renders the terms and conditions “reasonably conspicuous.”  The court identified so-called “clickwrap” agreements (which require users “to click an ‘I agree’ box after being presented with a list of terms or conditions”) as “the easiest method of ensuring that terms are agreed to.”  At the other end of the spectrum are “browsewrap” agreements, which “involve terms and conditions posted via hyperlink” but “do not request an express manifestation of assent.”

Amazon argued that its conditions of use fell somewhere “in between” a clickwrap agreement and a browsewrap agreement.  Unlike a clickwrap agreement, Amazon’s webpage did not require users to tick an “I agree” box, but it did inform them that by placing their order, they agreed to Amazon’s conditions.  Yet the court deemed that language insufficient to establish reasonable notice as a matter of law because it was “not bold, capitalized, or conspicuous in light of the whole webpage,” which also included many other links and various other text in a number of different sizes and colors “alongside multiple buttons and promotional information.” 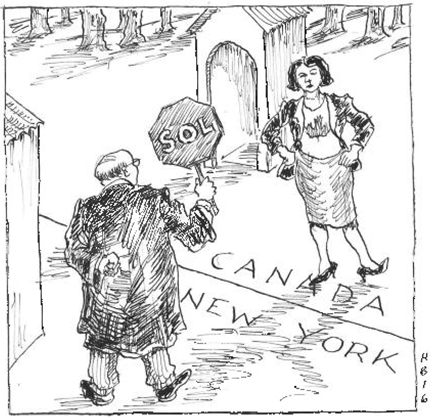 The Appellate Division, First Department applied the borrowing statute to hold that a Canadian plaintiff’s breach of contract claims accruing in Ontario, Canada were time-barred under Ontario’s two-year limitations period—even though the parties’ agreement contained a broad New York choice-of-law clause and the claims would have been timely under New York’s six-year statute of limitations.  The court agreed that the choice of law clause providing that the agreement “shall be governed by, construed and enforced in accordance with” New York law reflected “the parties’ intent to apply both the substantive and procedural law of New York State to their disputes.”  But the court deemed that circumstance irrelevant because the borrowing statute “is a statute of limitations in its own right” rather than “a statutory choice-of-law directive” that might have been superseded by the parties’ contractual choice of New York law.

On that basis, the court found that application of the borrowing statute was “perfectly consistent” with existing New York Court of Appeals precedent.  The court recognized that the plaintiff raised “valid” policy arguments against application of the borrowing statute on these facts, “including that it is inconsistent with New York’s current policy to encourage businesses to use New York courts” to resolve their disputes, and that the parties’ contractual choice of New York law obviated any “forum shopping” concerns.  But the court concluded that such policy issues “are best left to the state legislature to resolve.”