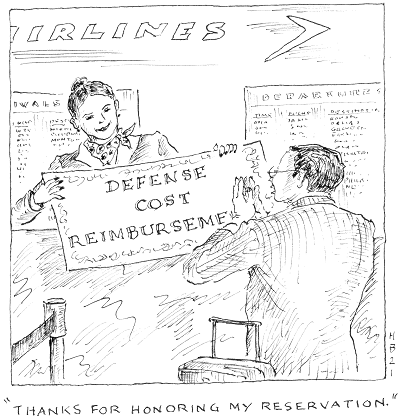 Liability insurers frequently defend claims against their policyholders subject to a reservation of rights, while simultaneously litigating with the policyholder whether a defense is required at all.  But what if the insurer wins the coverage litigation?  Courts are split as to whether the reinsurer may not only stop defending the claim, but also seek reimbursement of defense costs it has already paid.  The Nevada Supreme Court has now joined the majority of courts holding that insurers can seek reimbursement of defense costs – at least where the insurer has specifically reserved that right in writing.  Importantly, the court rested that conclusion on its application of the law of restitution and not on the language of the insurance policy.

The case arose out of an insurance policy issued by Nautilus to Access Medical covering liability for damages because of personal or advertising injury “arising out of . . . oral or written publication, in any manner, of material that slanders or libels a person or organization.”  Access Medical sought coverage for a suit brought by a former business partner for, inter alia, interference with prospective economic advantage.  The complaint, however, did not allege a false statement that would support a claim for slander or libel.

Nautilus initially declined to defend.  It then reversed course and provided a defense under a written reservation of its rights to disclaim coverage, withdraw from the defense, and obtain reimbursement of defense costs.  Nautilus then commenced a coverage action in federal court seeking a declaration that it had no duty to defend.

The trial court agreed that Nautilus had no duty to defend, but denied Nautilus’s motion for reimbursement of the defense costs it had already incurred.  The Ninth Circuit, however, certified the question of whether Nautilus could seek such relief to the Nevada Supreme Court.

The Nevada Supreme Court held that Nautilus was entitled to reimbursement under a theory of unjust enrichment.  The court noted that an insurer risks unbounded liability if it refuses to defend its insured, but then loses a coverage dispute.  As a result, it makes sense to allow the insurer to defend first and determine coverage later.  The Court therefore held that where a court ultimately determines that an insurer never had a duty to defend, and the insurer clearly reserved its right to seek reimbursement of defense costs, the equities allow the insurer to seek restitution from the insured.

Notably, the court declined to follow the rule adopted by the recent Restatement of the Law of Liability Insurance.  Under Section 21 of the Restatement, an insurer may not obtain reimbursement of defense costs “[u]nless otherwise stated in the insurance policy or agreed to by the insured ….”  Rest. § 21.  The court held that it should not matter whether the policy expressly allows the insurer to recover defense costs.  It reasoned that, “when a court holds that there never was a duty to defend, it is holding that the claims were never even potentially covered by the policy.”  As a result, said the court, “there is no reason [the insurer] cannot reserve a right it has, not pursuant to the contract, but pursuant to the law of restitution.”  In other words, the insurer’s right to reimbursement is not contractual.

The Covid-19 pandemic has triggered a flood of claims for business interruption coverage typically provided under commercial property policies.  Most trial courts to consider such claims have found that there was no coverage because the virus does not cause physical loss or damage to property.  In Food for Thought, the federal court for the Southern District of New York followed that trend.

Food for Thought, a catering service in New York City, was forced to suspend its business in order to comply with executive orders issued by the Governor and the Mayor.  Pursuant to a policy issued by Sentinel Insurance Company, Food for Thought sought coverage for:  (i) loss of “Business Income;” (ii) “Extra Expense;” and (iii) losses falling under the policy’s “Civil Authority” provision.  The court, however, granted Sentinel’s motion to dismiss.

Both the Business Income and Extra Expense provisions premised coverage on “direct physical loss of or physical damage to property.”  Food for Thought argued that it had sustained a “direct physical loss” to its premises because it had lost the use of its premises.  The court, however, held loss of use is not physical loss or damage.  It noted that in Covid-19 business interruption cases, “the great majority of courts … have held that a complaint which only alleges loss of use of the insured property fails to satisfy the requirements for physical damage.”

The Court also rejected Food for Thought’s suggestion it has sustained “physical damage” because COVID-19 was “likely present” on its property.  For one thing, these allegations were mere speculation.  Moreover, even if the virus was present on the property, there was still no loss or damage “because the virus’s presence can be eliminated by ‘routine cleaning and disinfecting,’ ….”

Civil Authority coverage under the policy was triggered only if (i) access to the premises was “specifically prohibited by order of a civil authority” and (ii) that the order was a direct result of “risk of direct physical loss” to the surrounding area.  The court held that this coverage was not triggered for three reasons.  First, the executive orders did not “specifically prohibit” Food for Thought from accessing its premises.  Second, the complaint failed to allege the “gist” of Civil Authority coverage:  “that physical harm to someone else’s premises has caused the civil authorities to prohibit access to the insured’s premises.”  Finally, Food for Thought did not allege any physical damage to property in the surrounding area.

Food for Thought is representative of most trial court decisions to consider similar Covid-19 business interruption claims.  The question now is whether the trend will continue at the appellate level.

Ninth Circuit Rules That Intentional Acts Are Not Insured “Occurrences”

Liability insurance generally covers “accidents” or “occurrences” rather than intentional acts.  In Hartford, the Ninth Circuit ruled that the building of a football stadium could not be considered an occurrence – even where it had the unintended effect of violating the Americans with Disability Act.

Litigation began when a plaintiff commenced a class action against the San Francisco 49ers alleging that the team’s new stadium lacked accommodations such as accessible seating.  The 49ers, in turn, sued the stadium’s builder, Turner/Devcon, for equitable and contractual indemnification.  Turner/Devcon then sought a defense from its insurers.

The U.S. District Court for the Northern District of California held, and the Ninth Circuit affirmed, that Turner/Devcon was owed no coverage.  The Court noted that the construction of a building in a particular manner is considered a deliberate or intentional act under California law.  As such, the construction of the stadium did not fall within the definition of “occurrence” in the operative insurance contracts.

Nor did it matter that the alleged violations of applicable accessibility laws were unintentional.  As the Ninth Circuit explained, “an insured’s intentional acts does not become an accident simply because it had the unintended effect of violating federal and state accessibility laws.”  Accordingly, because Turner/Devcon’s design and construction of the stadium were intentional, its insurers had no duty to defend.

The Target case arose out of a well-publicized data breach in which a hacker stole credit card and other personal customer information stored in Target’s computer system.  Following the breach, the banks that had issued the compromised credit and debit cards had to cancel them and reissue new cards to their customers.  The card companies then sued Target for the resulting costs, and Target settled.

The key issue was whether Target’s settlement payments – based on the banks’ cost of replacing the compromised credit and debit cards – were for “property damage” covered by the policies.  The policies defined “property damage” to include the “‘[l]oss of use of tangible property that is not physically injured.”  Because the cards were not “physically injured,” the question boiled down to whether the damages paid by Target could be characterized as for “loss of use” of the cards.

Target argued that, because the cards lost their use following the data breach, and the banks would not have sued Target otherwise, Target’s settlement payments necessarily constituted loss-of-use damages.  The court characterized this as “a but-for theory of loss-of-use damages.”  For its part, ACE contended that there was no nexus between the settlement payments and the value attributable to the loss of the use of the cards.  Rather, the settlements payments were based on the cost of replacing the cards.

The court sided with ACE.  It explained that Minnesota law requires loss-of-use damages to be “‘based on’ the alleged loss of use.”  As a result, loss-of-use damages must “have some connection to the value of the use of the now-damaged property when it previously was unimpaired.”  One measure of such damages, for example, might be reasonable rental value.  Here, however, Target did not provide any evidence of the value of the cards’ use, much less of the loss of their use.  The court therefore concluded that Target had not established that its settlement payments constituted loss-of-use damages.