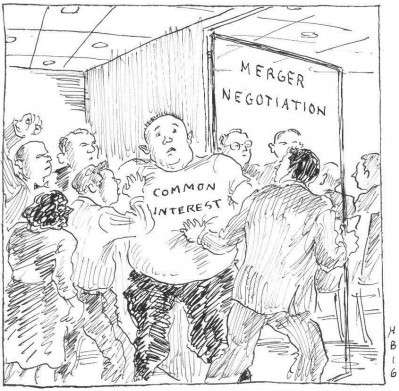 At issue were communications between the troubled home mortgage issuer Countrywide and Bank of America concerning their 2008 merger.  Bank of America argued that the parties’ merger-related communications should be protected in subsequent litigation because “highly regulated financial institutions constantly face a threat of litigation” due to the nature of their business.  The Court disagreed.

The Court held that the potential benefits of discarding the longstanding requirement of “pending or anticipated litigation . . . are outweighed by the substantial loss of relevant evidence, as well as the potential for abuse.”  It found no evidence that New York’s narrow application of the common interest doctrine had resulted in “a corporate crisis.”  Nor did the court find it “anomalous” that communications among parties represented by separate counsel receive less protection than communications among parties represented by a single attorney—a circumstance in which the parties “share a complete alignment of interests.”  Two judges dissented; they would have expanded the common interest doctrine to cover communications occurring during a “transformative business enterprise.” 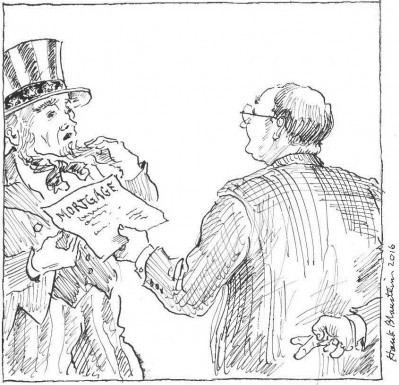 Timing is everything … Second Circuit: Willful contract breach is not fraud absent fraudulent intent at time of contracting.

Under New York law, “a representation is fraudulent only if made with the contemporaneous intent to defraud.”  Therefore, a plaintiff pursuing a fraud claim grounded in a contractual misrepresentation “must prove fraudulent intent at the time of contract execution; evidence of a subsequent, willful breach cannot sustain the claim.”

Applying these well-established common law rules in the “novel” context of a federal statute imposing civil penalties for mail and wire fraud, the Second Circuit reversed a $1.2 billion judgment against home mortgage issuer Countrywide.  The latter entered into contracts with two government-sponsored enterprises (“GSEs”) to sell them “investment quality” home mortgages.  The Government proved that Countrywide later sold the GSEs mortgages it “knew were not of the quality” it had promised in the contracts.  But the Government failed to prove “that at the time the contracts were executed Countrywide never intended to perform its promise of investment quality.”

Because the Government established only a “post-contractual intentional breach” of Countrywide’s prior representations to the GSEs, the Second Circuit held that “the jury had no legally sufficient basis” to find Countrywide liable for fraud.  The court rejected the Government’s argument that proof of fraudulent intent at the time of contracting should not be required, holding that abandonment of the contemporaneous fraudulent intent requirement would result in “a dramatic expansion of fraud liability” under New York law.

Enforcing arbitral awards against non-parties … Southern District of New York:  In confirmation proceeding under the FAA and New York Convention, court lacked authority to enforce arbitral award against non-parties to the award on an alter ego theory where (i) the New York Convention was the sole basis for jurisdiction and (ii) the alter ego question presented complex fact issues.  However, court issued sweeping asset preservation injunction to prevent further dissipation of assets while award creditor pursued alter ego theory in separate action.

Courts in the Second Circuit are reluctant to enforce arbitral awards against non-parties to the award on an “alter ego” theory in confirmation proceedings under the Federal Arbitration Act (“FAA”) and New York Convention.  With limited exceptions, the award creditor must establish the non-parties’ alter ego liability in a separate action before the creditor can enforce the award against them.  In the meantime, the court in the confirmation proceeding can maintain the status quo by enjoining the award debtor from transferring assets to the alleged alter egos or causing them to dissipate their existing assets.

The court in GE Transportation confirmed a nearly US$477 million Hong Kong International Arbitration Centre (“HKIAC”) award in favor of a Chinese party against a British Virgin Islands debtor arising out of a payment guarantee.  But the court held that it lacked authority in the confirmation proceeding to enforce the HKIAC award against the debtor’s alleged alter egos, including its chairman and CEO; various direct or indirect, wholly or partly-owned subsidiaries; and an unrelated company of which the debtor’s chairman and CEO was a former director, and to which he had transferred “substantial assets.”

Applying Orion Shipping & Trading Co. v. E. States Petroleum Corp. of Panama, S.A., 312 F.2d 299 (2d Cir. 1963), the court held that an action to confirm an arbitral award “is not the proper time . . . to ‘pierce the corporate veil.’”  Although courts in the Second Circuit recognize two exceptions to this general rule, neither exception applied.  The first exception provides that a court may confirm an arbitral award and enforce it in the same action against non-parties the court determines are the award debtor’s alter egos where a “separate jurisdictional basis” (such as diversity of citizenship of the parties) exists for enforcement against the alter egos.  But this exception does not apply where the court’s jurisdiction is based solely on the FAA’s grant of jurisdiction for cases falling under the New York Convention (as was the case here).  Second, even absent a separate jurisdictional basis, a court may enforce an arbitral award against non-parties in the same action if doing so will not “unduly complicate” the confirmation proceeding—i.e., where enforcement is “straightforward” and does not hinge on a “complex factual inquiry.”  That exception did not apply because enforcement against the “web of corporate entities” alleged to be the debtor’s alter egos was not a “straightforward task.”

Consequently, the court declined to enforce the award against the non-parties “without reaching the issue [of] whether they would qualify as alter egos.”  The court emphasized that this conclusion “in no way precludes [the creditor], in a separate proceeding, from pursuing liability against the alleged alter egos.”  Indeed, the court granted the creditor “fulsome relief” against the risk of further asset dissipation by not only permanently enjoining the award debtor from “transferring, dissipating or otherwise disposing of or diminishing in value any of its assets wherever they are located,” but also requiring the debtor “to exercise its control over any entities or persons owned or controlled by [it] to ensure that they and/or their subsidiaries do not remove, encumber, dissipate, or otherwise dispose of or deal with or diminish in value any of their assets.”