Arbitration in the Courts 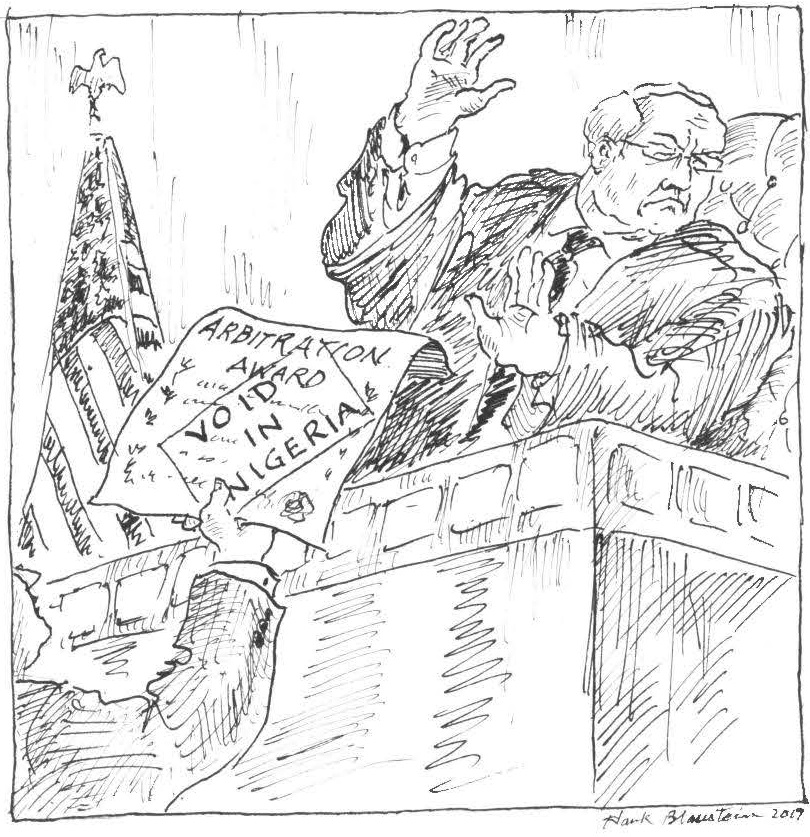 Federal Court in New York Refuses to Recognize Foreign Arbitral Award Set Aside at the Seat: Nigerian court’s decision to set aside award is entitled to comity.

Article V(e) of the United Nations Convention on the Recognition and Enforcement of Foreign Arbitral Awards (the “New York Convention”) provides that an enforcing court may refuse recognition and enforcement of an award if it “has been set aside” by a court at the seat.  In its seminal decision in Corporacion Mexicana De Mantenimiento Integral, S. De R.L. De C.V. v. Pemex-Exploracion y Produccion, 832 F.3d 92 (2d Cir. 2016) (“Pemex”), the Second Circuit Court of Appeals (the “Second Circuit”), whose decisions are binding on federal courts in New York, confirmed that principles of international comity ordinarily require that a U.S. court refuse to enforce an award that has been set aside by a court at the arbitral seat.  Pemex, however, also recognized that in extraordinary circumstances, the foreign court’s set-aside judgment may be so repugnant to U.S. public policy that it should not be recognized.  In Pemex, the Second Circuit enforced a Mexican arbitral award against a state-owned oil company, despite a Mexican court order setting it aside.  The Mexican court’s decision was based on a retroactive change in Mexican law, which had been adopted after the petitioner had obtained the award, and purported to render the petitioner’s claims not only non-arbitrable, but also subject to a brief, by then already-expired, statute of limitations.  Because, among other reasons, the change in Mexican law left the petitioner with no forum at all to resolve its claims, the Second Circuit found that the Mexican court’s annulment was repugnant to U.S. public policy, and enforced the award.

In Esso, the petitioners invoked Pemex in seeking recognition and enforcement of a foreign award that had been set aside at the seat in Nigeria.  The case involved a petition to enforce a $1.8 billion award issued in an ad hoc arbitration seated in Nigeria.  The dispute arose out of a production sharing agreement between affiliates of Shell and ExxonMobil (together, “Esso”) and Nigeria’s state-owned oil company, NNPC, to develop and extract oil from a field off the coast of Nigeria.  The agreement provided for the allocation of oil to the parties in four tranches, one of which was “Tax Oil,” which was allocated to NNPC to cover tax payments to the Nigerian government.  After oil production began, NNPC lifted more oil than Esso had allocated, because it determined that Esso’s allocations of “Tax Oil” were insufficient to satisfy the parties’ tax obligations.  Complaining that NNPC’s extractions breached the parties’ agreement, Esso initiated arbitration in Nigeria and was ultimately awarded $1.8 billion in monetary damages and other declaratory relief.  Esso then sought to confirm the award in Nigeria, while NNPC, who had objected from the outset to the arbitral tribunal’s jurisdiction, moved to set it aside.  The Nigerian trial court granted NNPC’s set aside motion.  The Nigerian Court of Appeal upheld certain portions of the award, but affirmed the set aside of the award of monetary relief, finding that tax disputes were not arbitrable under Nigerian law.

Relying principally on Pemex, Esso sought to confirm the annulled award in the United States on the ground that the Nigerian Court of Appeal’s decision violated U.S. public policy.  The district court rejected this argument, and declined to confirm the award.  The court distinguished Pemex on three grounds.  First, because it was arguable that the dispute was not arbitrable under Nigerian law and NNPC, unlike the petitioner in Pemex, disputed the tribunal’s jurisdiction from the outset of the arbitration, the court concluded that “it cannot be said that the parties agreed to arbitrate this dispute.”  Second, in setting aside the award, the Nigerian court applied existing Nigerian law in a reasoned decision, unlike the retroactive legislation that served as the basis for annulment in Pemex. Finally, Esso was not left without a forum to assert its claims because its appeals were pending in Nigeria.  Moreover, because Esso knew from the outset that NNPC contested the tribunal’s jurisdiction, it could have pursued its claims through litigation.  Given these facts, the court held that the case did not present the extraordinary circumstances that would warrant denying comity to the Nigerian court’s decision setting aside the award. 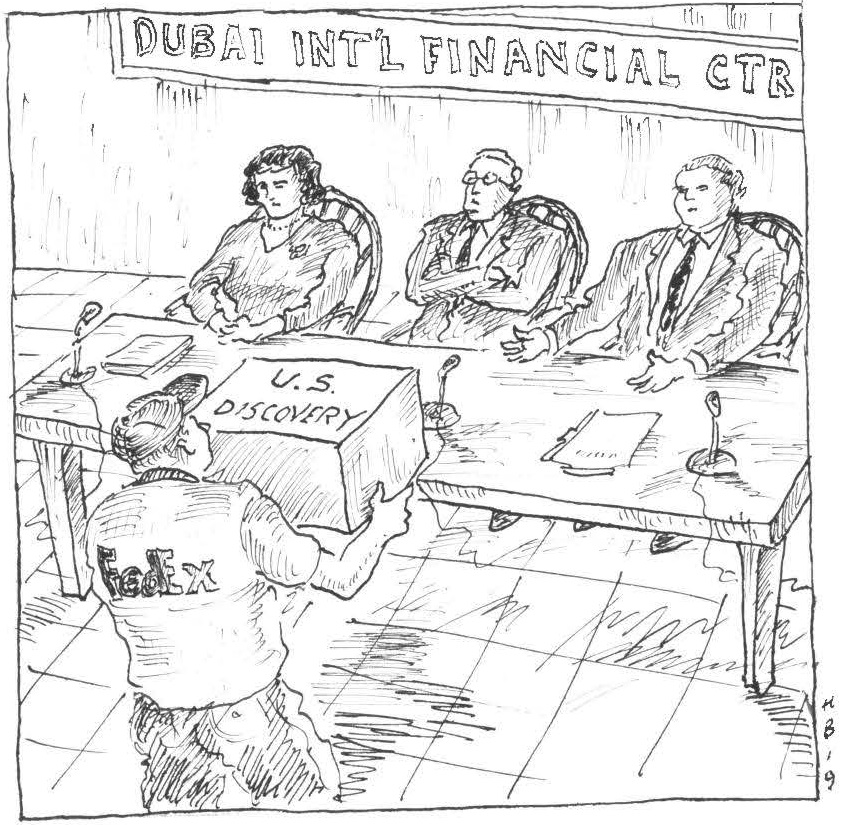 Sixth Circuit Holds That U.S. Courts May Order Discovery for Use in Foreign Arbitration: Private arbitral tribunals constitute a “foreign or international tribunal” under statute authorizing discovery in aid of foreign proceedings.

28 U.S.C. § 1782(a) authorizes federal district courts to order discovery “for use in a proceeding in a foreign or international tribunal” upon application by “any interested person.”  In Abdul Latif Jameel Transportation, the Sixth Circuit, which has jurisdiction over federal courts sitting in Tennessee, held that a privately-constituted arbitral tribunal is a “foreign or international tribunal” under Section 1782.  Accordingly, the court held, the statute permits a party to obtain third-party discovery from parties residing in the United States for use in a private commercial arbitration seated abroad. The Second and Fifth Circuit Courts of Appeal had previously held that Section 1782 discovery is not available in connection with private arbitration proceedings because the statutory phrase “foreign or international tribunal” refers only to “state-sponsored” tribunals.  See National Broadcasting Co., Inc. v. Bear Stearns & Co., Inc., 165 F.3d 184 (2d Cir. 1999); Republic of Kazakhstan v. Biedermann Int’l, 168 F.3d 880 (5th Cir. 1999). The Sixth Circuit’s decision in this case sets up a Circuit split that could very well make its way to the Supreme Court for final resolution.

The Sixth Circuit reversed, finding that the plain meaning of “tribunal,” as used in the statute, was broad enough to include private international arbitration.  In reaching its conclusion, the Sixth Circuit criticized the Second and Fifth Circuits’ holdings that only “state-sponsored” proceedings fall within Section 1782’s scope as too reliant on legislative history, which it found inappropriate in light of what it deemed the plain meaning and longstanding usage of the word “tribunal.”

Starting in 2014, the Micula brothers, dual Swedish-Romanian nationals, sought to enforce in the United States an award issued in their favor against Romania. In the meantime, however, in March 2018, the European Court of Justice (the “ECJ”) ruled in Slovak Republic v. Achmea that all arbitration agreements included in bilateral investment treaties (BIT) between EU states were invalid, because granting tribunals the authority to enforce EU law unduly encroaches upon the ECJ’s authority to interpret and apply that law, as envisioned by the EU treaties.

Romania’s principal argument against enforcement of the Micula award was that the district court did not have subject matter jurisdiction to enforce the award under the Foreign Sovereign Immunities Act (FSIA).  Under the FSIA’s arbitration exception (28 U.S.C. § 1605(a)(6)), foreign sovereigns are not entitled to immunity in cases seeking to enforce foreign arbitral awards governed by international conventions, such as, in this case, the Convention on the Settlement of Investment Disputes between States and Nationals of Other States (commonly referred to as the  ICSID Convention).  But Romania argued that, under Achmea, the arbitration clause in the Sweden-Romania BIT was invalid.

The court rejected Romania’s objections and held that the FSIA’s arbitration exception applied.  Achmea did not preclude arbitration under the BIT, because the claims in the arbitration concerned actions taken before Romania’s accession to the EU.  Accordingly, the arbitral tribunal was not bound by and did not interpret or apply EU law.

Fifth Circuit Holds Court Decides Whether Claims are Arbitrable Despite Arbitration Clause’s Incorporation of the AAA Rules:  Incorporation of institutional rules not sufficient to delegate arbitrability to the arbitrators where clause clearly carves-out claims for injunctive relief.

The Federal Arbitration Act does not per se incorporate the principle (known as “competence-competence”) that arbitrators should determine their own jurisdiction in the first instance.  Rather, under U.S. law, it is presumptively for a court to decide in the first instance whether the parties’ dispute falls within the scope of their arbitration agreement.  However, the United States Supreme Court has also held that if the parties “clearly and unmistakably” agree to delegate this question to the arbitrators, their agreement will be respected, and the arbitrators should in that case determine in the first instance whether a particular dispute falls within the scope of the parties’ arbitration agreement.  Applying this rule, most federal courts have recognized that the agreement to arbitrate under institutional rules granting the arbitrators jurisdiction to determine their own jurisdiction (such as the American Arbitration Association’s Commercial and International Rules), constitutes a clear and unmistakable delegation of the issue to the arbitrators.

In Archer, the arbitration provision in the parties’ agreement provided, in relevant part, that “[a]ny dispute arising under or related to this Agreement (except for actions seeking injunctive relief . . .), shall be resolved by binding arbitration in accordance with the arbitration rules of the American Arbitration Association [AAA].” (Emphasis added).  The plaintiff commenced a court action seeking both money damages and injunctive relief for alleged violations of federal and state antitrust laws.  The defendant moved to compel arbitration.

The defendant argued that, by incorporating the AAA Rules into their agreement, the parties had delegated to the arbitrators the authority to determine whether the claims were subject to arbitration.  The defendant accordingly argued that the court should refer the matter to arbitration for the tribunal to consider this threshold jurisdictional question.  The court disagreed, finding that the carve-out language in the arbitration clause for actions seeking injunctive relief precluded arbitration.  Specifically, the court held that the “plain language incorporates the AAA rules—and therefore delegates arbitrability—for all disputes except those under the carve-out.”  Thus, the parties did not clearly and unmistakably delegate all questions of jurisdiction to the arbitrators, and whether plaintiff’s claims fell within the carve-out, and therefore outside the scope of the agreement to arbitrate, was a question for the court in the first instance.

Arbitration in the Courts